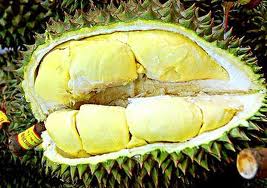 This is durian. Vietnamese name is Sau Rieng means “self- sadness”. I don’t know how sadness it is but it tastes wonderful. 15 years ago when Asian food was not imported as much to Canada or Toronto where crowded by a lot of refugees from Asia, every time somebody went back to visit the country they all brought back a few of them. Durian is kind of expensive. At the time, only rich people and people that got immigrated were able to buy it (when they visited their own country). There are so many kind of durian but the Thai durian is the best one. Its scalps are big, smelly, sweet and dry. The funny thing was the immigrated people did not want to put those durians in the languages. Otherwise they would be overripe and would not be fresh on arrival. So they tried to carry them on the plane, and the white people were just like “what the heck that smell!”. There were complaints over the durian between white people to the airlines because really the smell would be horrible if you do not know it when you were younger. It may be smelt like salted fish sauce if you want to imagine it that way. But for sure it is way better. Now there is no more durian carried on the planes, you can find it in the Chinese supermarket and white people who have Asian friends know more about it. They love it too. We can make durian sticky rice and desserts.